Diversity and inclusion is a class issue – even in Australia

My thoughts after reading the article ‘Diversity and inclusion is a class issue – even in Australia’.

I think class and inequality in Australia is a really important issue.  When I was in my senior years of high school my family fell on hard times and became socially and economically disadvantaged.  I grew up on a small farm in rural Queensland, and although we were not rich, I never really felt poor, because our family was well established and we had so much space and always had enough food.  When my parents separated, my father became a sole parent.  We stayed on the farm for a few years, but as my parents interactions took a turn for the worse, and started to involve lawyers and property settlements, the dispute over finances meant he felt we needed to move away from the farm.

First my father took my sister and I to the Netherlands, which is where he was born.  We lived there for around 8 -9 months, we were meant to go for 12 months, but by the time we reached the end 8 months it had become apparent that we were hemorrhaging money and would not be able to sustain ourselves any longer.  My father took a job in a factory, but he quit shortly after because he didn’t feel secure, and thought they might not pay him, he also thought the OH&S there was terrible and he might die of a lung disease if he stayed due to the fibres in the air.  My father thought we could not return to the farm, and the only person he though might be able to help us was his sister who lived in Sydney.  We arrived at my aunts house shortly after and stayed with her for a few months while dad tried to find a suitable apartment in Sydney.

Many of the apartments in our price range had mold on the walls or only one bedroom, or were in unsafe neighborhoods, so it took him some time to find a place for us. We always struggled with having enough money in Sydney.  Buying enough food to eat was a difficulty.  My father did as well as he could putting healthy food on the table, but there was a definite lack of things like fresh juice, and a variety of fruit.  There were little to no sweets, like biscuits or ice cream.  No frills at all.  I remember not having enough money to buy things like new underwear or even a bra. I remember wearing singlets because I couldn’t afford to buy a bra and being 16 and worrying they might be see-through.  I remember getting really upset one day about it and yelling so loud to my father about it that my neighbor heard.  The next day, my neighbor Cynthia, a woman with a beautiful heart, gave my sister and me a bag of her daughters old clothes — I was eternally grateful for her kindness.  I felt so guilty for yelling …  I felt undeserving.  I knew that I should not have been so angry over something so out of our control.  I was a teenager, I was anxious … stressed.  Overwhelmed.   I never let myself yell angrily about not having enough again.  If I felt angry, I would allow that feeling, but I would reflect on it, and not let it negatively impact others if I possibly could.

By this time I had missed over 2 years of formal education.  I enrolled in the local state high school, and they kindly turned a blind eye to my lack of school report cards and paperwork.  We literally had nothing.  We packed a suitcase of clothing each when we moved to The Netherlands, thinking it was a lengthy vacation and not a permanent move.  No one had thought we might need report cards.  I hadn’t been attending school for much of the 2 years mainly due to bullying in Queensland, and then later in The Netherlands my father not being able to afford school fees. 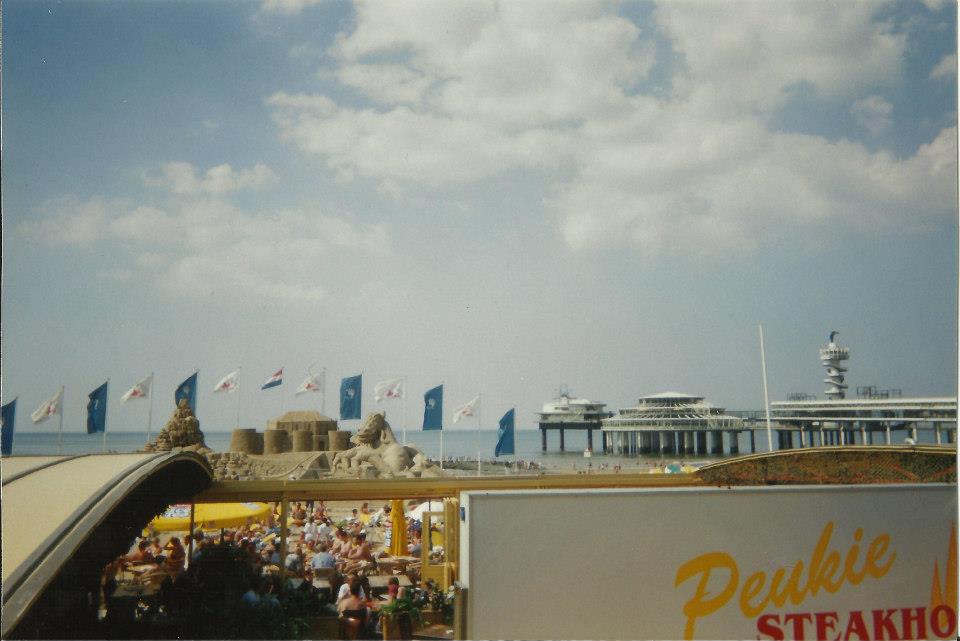 Photo: A photo I took at the sandcastle competition at the famous pier at Scheveningen, The Hague, The Netherlands (c. 2001).

I was admitted to The University of Sydney on a social equity scheme called the Broadway Scheme.  Despite The University’s elite reputation, The University of Sydney was founded upon the principle of being an equitable institution for all, where people could be offered a place based on academic merit and not their parents bank account.  At that time about 5% of students were quietly admitted via the Broadway Scheme.  It was a great opportunity of which I am thankful.  The only downfall of it was that once I was in I was very much on my own. There was no network for students in the scheme or extra support.  I  had to manage to buy things like expensive text books (there were no ‘free’ PDFs or virtual bookshelf hire options online back then), pay mandatory student union and sports fees , which were very expensive (at that time about AU$700 a year at Sydney Uni), find access to a computer in the library to access my course content (I didn’t have the internet at home).

I remember asking my chemistry lecturer if he could put the lectures on a disc for me.  He was a great lecturer, but an old and grumpy guy, and kind of put out by my request — but he did it for me.  I got a disc of files.  He said something along the lines of ‘I am only doing this once —  so don’t loose it’.  Because I didn’t have the internet at home, I was often behind on things like online pre-lab quizzes if I couldn’t get to the library to do them, so I let a lot of marks just slide because it was hard to stay back late after 5 pm to go to the library after class.  Some nights I would stay at the library until 10 pm, but I felt safer studying at home.  In the first year it was okay because I was still living with my father.  But after he moved back to Queensland, I felt abandoned.  I was really on my own, surviving on Youth Allowance as a full time engineering student.  The coursework was intense, long contact hours, and I did about 5 hours a night homework.  I was exhausted and didn’t feel I could also work.  I struggled to eat enough.  I had a flat mate but money was definitely a lot tighter.  Probably a factor in this is that the cost of living had increased, but Youth Allowance hadn’t.  I previously wrote a post on how difficult it is to survive on Youth Allowance as a full-time student.  Post available here: Affordable accommodation for disadvantaged university students?.  Back then I was always hungry, it was hard to afford enough food to eat.  I was used to being hungry.  It was not until I was more financially secure that I realised … all those years … that gnawing ache in my stomach — was hunger.

I wasn’t close with my aunt, who by that stage had re-married, and I didn’t feel I could go to her for help.  I knew my parents didn’t have the money to help me out — so I just persevered and struggled on.  When I turned 18, I had inherited a small amount of money, about $2000, from my great aunt.  I had saved it for university expenses, and I used up almost all that money on purchasing my course materials, and the fees I had to pay to the union and the sports centre.  I remember feeling so upset about the university sport fees, because even after paying about $250 – $300 a year to them I wasn’t allowed to use the gym or anything like that … it really was fee for no service.  I felt robbed of the small amount of money that I had.

Photo: My friend Vicky (left) and me (right) when we were first year Engineering students at The University of Sydney (c. 2004).

I remember I realised at one point I needed to work if I was going to survive.  I once had a job interview in Bondi, but on the day I couldn’t go to the interview because I literally couldn’t afford the bus ticket.  I had no money at all.  On the day of the interview, I had taken the train to Bondi Junction, I got off the train and went to catch the bus to Bondi Beach to the shop where the interview was. I saw I had no money in my wallet.  I went to the ATM and did not have enough money to make the minimum withdrawal of $20.  I remember trying to make a phone call from a payphone to let them know I couldn’t attend, but I didn’t have 50 cents.  By that time I was 30 minutes late for the interview.  I gave up and went home in tears.

I think a lot of people don’t even think of something like being able to afford enough food, to make a phone call, buy a bus ticket, or access the internet at home.  Australia has just shifted so much in the last 20 years and left so many people behind.

So much of finding a job in Australia is about not only having the skills and knowledge — but knowing the right people and networking.  What many people of privilege or even moderate wealth don’t realise, is that it is also about having the economic and social resources available to find a job and attend a job interview.  People from disadvantaged backgrounds and circumstances just face so many more hurdles than the average person.  I feel it should be taken into account not only when getting into university with great schemes like Broadway, but also through support networks at university, and later in dignified support actually getting into work that is specialised for economically or socially disadvantaged students, perhaps run through partnerships between universities and TAFE careers centres and employers, or a dedicated government lead organisation partnered with employers, rather through Centrelink JobActive providers, which many of these students do not have access to on the Youth Allowance payment, and is not in my opinion set up for these students unique needs.

My objective is to bring easy access to free and trustworthy financial education, economics opinion and theory to girls and women (others are welcome to read too!). I am a Master of Economics student. I'm interested in research in inequality, and sustainable investing. I have a strong interest in markets and investing and I am interested in working as an Equities Research Analyst or in Investment Management. View all posts by Ellie Fleischer